The impact of yoga in the process of trauma recovery

The impact of yoga in the process of trauma recovery 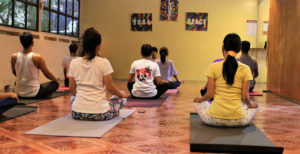 In a quiet and verdant courtyard, beside a small stand selling sports clothes and fruit juices, is a sign announcing an event for International Yoga Day. But it isn’t just any event, and Phnom Penh’s Nataraj Yoga Studio is not just any yoga studio. It is also home to Krama Yoga Cambodia, an NGO that supports disadvantaged children and female trauma victims through the practice of yoga.

Lun Piseth, who was first introduced to yoga at Nataraj studio, has recently taken on the role as manager of both the studio and Krama Yoga. He believes that yoga can be a powerful tool in aiding the recovery of people with troubled backgrounds.

“They find that it challenges them a lot. But this challenge gives them strength,” he said. “They feel that [with yoga] they can open up more compared to with other activities, and they feel more confident with what they stand for. They see the value of doing yoga in the process of healing.”

Back in 2004 Canadian Isabelle Skaburskis opened a yoga studio in Phnom Penh, at a time when there were very few options in the city for people who wished to practice yoga. But she also had another idea in mind – to use yoga as a means of healing. She invited a group of six young Cambodians from different backgrounds, including victims of human trafficking, abuse and violence, to train with her full time for two years. At the end of the programme, the students became the teachers, and in 2010 Krama Yoga Cambodia launched as an official NGO.

Both trafficking and child poverty have long been issues in Cambodia. According to a Global Slavery Index report from 2016, approximately 256,800 people – 1.65% of the population – live in conditions of modern slavery in Cambodia. The 2017 Trafficking in Persons report which was carried out by the US Department of State notes that despite efforts by the government, “Cambodia does not fully meet the minimum standards for the elimination of trafficking”.

While Krama Yoga is not part of the preventative process, it can have results in helping the healing.

“What we notice is their peaceful smiles after the class,” Piseth said when describing the students from the trauma sensitive classes. “They feel relaxed and happy when they walk out.”

Krama Yoga’s therapy programme, through cooperation with other specialised NGOs, is now attended by 75 women per week. The teachers work closely with professional case workers to help the students cope with any emotional responses brought on by the physical practice of yoga. On top of this, around 300 children from poor backgrounds are enrolled in the kids programme, where many of them have the chance to experience yoga for the first time.

“The kids that have a lot of issues with their families or have [financial] difficulties – maybe they don’t have enough food or care – discover that in the class they can push themselves more and that gives them more confidence in life,” said Piseth.

This year Krama Yoga is bringing hundreds of its students together to acknowledge International Yoga Day, a chance not only to celebrate, but also to reflect on the impact that yoga has had on this wide community of people.

“In the modern world, [life is a] race – it’s about how to be the best,” Piseth opined. “But yoga is different. Yoga gives you a lot of pictures of self reflection, and you see the value of living more than just racing.”