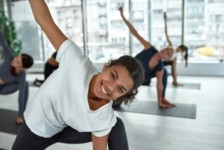 No matter what happened (or when), experiencing trauma can have lasting effects that interfere with your daily life. And while healing can help ease lingering symptoms (typically the result of post-traumatic stress disorder) the remedy is not one-size-fits-all. Some trauma survivors might find success with cognitive behavioral therapy, whereas others might find somatic experiencing — a special type of trauma therapy that focuses on the body — more helpful, according to Elizabeth Cohen, Ph.D., a clinical psychologist in New York City.

One way survivors can engage in somatic experiencing is through trauma-informed yoga. (Other examples include meditation and tai chi.) The practice is based on the idea that people hold trauma in their bodies, says Cohen. “So when something traumatic or challenging happens, we have a biological tendency to go into fight or flight,” she explains. This is when your body is flooded with hormones in response to a perceived threat. When the danger is gone, your nervous system should gradually revert back to its calmer state.

“Even after the threat is gone, trauma survivors are often stuck in a stress-based fear response,” says Melissa Renzi, M.S.W, L.S.W., a licensed social worker and certified yoga instructor who trained with Yoga to Transform Trauma. This means that even though the threat is no longer present, the person’s body is still responding to the danger.

And that’s where trauma-sensitive yoga comes in, as “it helps move that basically unmetabolized trauma energy through your nervous system,” says Cohen.

What Is Trauma-Informed Yoga?

There are two different approaches to trauma-based yoga: trauma-sensitive yoga and trauma-informed yoga. And while the terms sound pretty similar — and are often used interchangeably — there are important distinctions between them based on the instructors’ training.

Oftentimes, trauma-sensitive yoga refers to a specific program known as Trauma Center Trauma-Sensitive Yoga (TCTSY) developed at the Trauma Center in Brookline, Massachusetts — which is part of the greater Center for Trauma and Embodiment at the Justice Resource Institute. This technique is a “clinical intervention for complex trauma or chronic, treatment-resistant post-traumatic stress disorder (PTSD),” according to the Center’s website.

However, not all trauma-sensitive yoga classes, draw upon the TCTSY methodology. So, generally, trauma-sensitive yoga is specifically for someone who has experienced trauma, be it in the form of a traumatic loss or assault, childhood abuse, or daily trauma, such as that inflicted by systematic oppression, explains Renzi. (Related: How Racism Affects Your Mental Health)

Trauma-informed yoga, on the other hand, “assumes that everyone has experienced some level of trauma or significant life stress,” says Renzi. “There’s an element of unknown here. Thus, the approach rests on a set of principles that supports a sense of safety, support, and inclusivity for all who walk through the door.”

How Do You Practice Trauma-Informed Yoga?

Trauma-informed yoga is based on the hatha style of yoga, and the emphasis on proper technique has nothing to do with form and everything to do with how participants are feeling. The goal of this approach is to provide survivors a safe space to focus on the power of their body to inform decision-making, thereby strengthening their body awareness and fostering a sense of agency (something that’s often negatively affected by trauma), says Banks-Harold, who’s also the owner of PIES Fitness Yoga Studio.

While trauma-sensitive yoga classes may not appear very different from your everyday boutique studio class, there are some variations to expect. Typically, trauma-informed yoga classes don’t have music, candles, or other distractions. The aim is to minimize stimulation and maintain a calm environment through low or no music, no scents, calming lights, and soft-voiced instructors, explains Renzi.

Another aspect of many trauma-informed yoga classes is the lack of hands-on adjustments. Whereas your go-to hot yoga class is all about mastering a Half Moon pose, trauma-sensitive yoga — particularly the TCTSY program — is about reconnecting with your body while moving through poses.

In order to create a safe environment for students, the structure of a trauma-informed yoga class is also inherently predictable — and purposefully so, according to Alli Ewing, a TCTSY facilitator and trainer and founder of Safe Space Yoga Project. “As instructors, we try to show up in the same way; structure the class in the same way; to create this container for ‘knowing,’ whereas with trauma there’s this great sense of unknowing of what’s going to happen next,” explains Ewing.

The Potential Benefits of Trauma-Informed Yoga

It can improve your mind-body connection. Yoga puts an emphasis on fostering the mind-body connection, which Cohen says is important for survivors to heal. “The mind can want something, but the body can still be bracing in hypervigilance,” she says. “It’s essential for full holistic healing for you to involve both the mind and the body.”

It calms the nervous system. Once you go through a highly stressful or traumatic event, it can be hard for your nervous system (the master control center for your stress response) to go back to baseline, according to Cohen. “Yoga activates the parasympathetic nervous system,” which tells your body to calm down, she says.

It emphasizes the present. When you’ve experienced trauma or a stressful event, it can be hard to keep your mind in the here instead of on a loop in the past or trying to control the future — both of which can compound stress. “We focus a lot on our connection to the present moment. We call it ‘interoceptive awareness,’ so navigating the ability to notice sensations in your body, or notice your breath,” says Ewing of the trauma-sensitive yoga technique.

It helps reclaim a sense of control. “When a person experiences trauma, their capacity to cope is overwhelmed, often leaving them feeling powerless,” says Renzi. “Trauma-informed yoga can support a sense of empowerment as students build self-trust and self-leadership skills.”

How to Find a Trauma-Informed Yoga Class or Instructor

Many yoga instructors who specialize in trauma are currently teaching private and group classes online. For example, TCTSY has an extensive database of TCTSY-certified facilitators across the globe (yes, globe) on their website. Other yoga organizations such as Yoga for Medicine and Exhale to Inhale also make finding trauma-informed yoga instructors simple with online directories and class schedules.

Another idea is to reach out to your local yoga studio to ask about who, if anyone, might be trained in trauma-informed yoga. You can ask yoga instructors If they hold specific credentials, such as the TCTSY-F (the official TCTSY program facilitator certification), TIYTT (Trauma-Informed Yoga Teacher Training certification from the Rise Up Foundation), or TSRYTT (Trauma-Sensitive Restorative Yoga Teacher Training also from the Rise Up Foundation). Alternatively, you can ask the instructor what kind of training they specifically have around trauma and make sure they have trained in a formal program before working with them.